What Is Psychological Trauma: Event vs. Effect 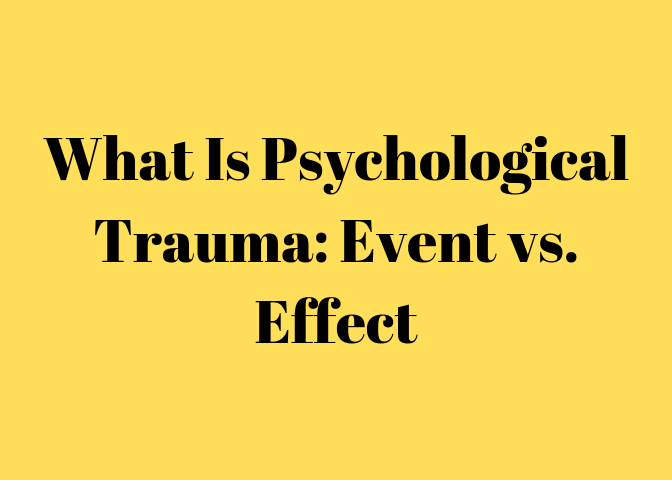 What Is Psychological Trauma: Event vs. Effect

What is psychological trauma? How do we define it? There are several different ways to define trauma; one way is trauma is an emotional, mental, and/or physical response to an event such as a natural disaster, accident, violent incident, or conflict like combat or a war. A big part of it being a traumatic event or situationis that itoverwhelms the individual’s ability to cope.

A key component to this definition is an individual response to the traumatic event. It is not the event that creates the psychological trauma; rather, it is the individual person’s experience of the event that does. For example: two people survive the same event, like a tsunami, they each have very different personal views of the event. One may see it as a challenge in their life and work to overcome it, while the other may see it as a crushing experience that they will never recover from. This is the difference between event and effect.

Often an event is said to be ‘traumatic’. As the example above highlights, it is not the event, but a person’s experience of it that can be traumatic. A tsunami is a powerful force of nature that can destroy what it encounters, but that is all it is, a force of nature. How we, as people, experience this force of nature determines whether it is traumatic. Ultimately, any situation, event, or incident can be traumatic or not depending on the individual person who experiences it. If everyone in the world is unique, so are their feelings, experiences,and memories. When thinking about traumaor placing the tag ‘traumatic’ on an event, we need to remember this.

Signs of Trauma: building off the definition used above, signs of trauma will be broken into three categories; emotional, mental, and physical. A person may experience signs from one, two, or all three of the categories.

Lack ofEmotion; this may look like a person who no longer takes joy in things they may have in the past or a person doesn’t seem to care about anything.

Uncontrollable Emotions; this may be a person who cannot stop crying or being overly sad after a good period has passed following the event. It could also be a person who gets overly angry at circumstances that don’t call for such a strong response.

Fear; this can be a person being scared all the time after an event or a person who becomes so vigilant to not be scared anymore that the rest of their life suffers.

Avoidance; this may look like a person who refuses to talk about the event or do anything that reminds them of it.

Trouble Concentrating; this can look several ways, here are two: 1. The person’s mind is slow to put thoughts together, so they answer questions slowly or not at all. 2. They are concentrating so hard on the event that they can’t do anything else.

Shutting Down; this may look like a person who does not respond to stimulation and sits without seeing or hearing the world around them.

Pain; trauma, in some people, can become physical pain. The way they handle psychological things in their life is to turn it into pain in their body, like stomach pains or back pain. They don’t do this by choice or know their body is doing it, it just does. This can be a hard connection for friends, family, and even medical professionals to make.

It is important to remember what was discussed earlier, each person experiences trauma differently so some of these examples of the signs of trauma may not fit with everyone. Likewise, there may be signs of trauma that are not represented in the examples as well. If someone thinks they may know someone who is struggling with the effects of a traumatic event, it may be a good idea to seek help.

Following the tsunami, I had client come to me that we’ll call ‘Prasanth.’ Prasanth’s family was worried for him. Sitting down with him, he didn’t want to talk at first, so we sat quietly for a time. When Prasanth decided to talk, his voice was soft, “I’ve lost everything,’ he said.

“The tsunami swept everything away, my family, my house, my crops, I have nothing…nothing.” He dropped his head in hands.

“I can’t truly understand what you’ve gone through, but I want you to know that I’m here to listen.” My mind starting racing with the signs of psychological trauma and what it looks like and how it looks in someone.

I know there are several different ways to define trauma, my mind kept coming back to one; trauma is an emotional, mental, and/or physical response to an event such as a natural disaster, accident, violent incident, or conflict like combat or a war. A big part of it being a traumatic event or situation is that it overwhelms the individual’s ability to cope. I also remembered a key component to this definition is an individual response to the traumatic event, that it is not the event that creates the psychological trauma; rather, it is the individual person’s experience of the event that does.

Yet, all this knowledge, all these facts and definitions, wouldn’t mean a thing to the man sitting across from me if I couldn’t figure out a way to make this all make sense.

“Prasanth, can I tell you a story?” He looked up at me and nodded.

Two weeks later, Saman sits every day on the road in front of his ruined house. He says very little to anyone, even Mali, when he is asked how he is doing. He sits and stares at the broken pieces of his house and cries often for the loss of his wife and daughter. When Saman does talk to anyone, he says he is so tired and that his back hurts all the time. He says this is from the earthquake and he doesn’t have the strength in his body to do anything.

Mali comes to the ruins of his house every morning. He looks at it and feels the pain of the loss of his wife and son. He stands quietly for a moment and says a prayer for them. After that, Mali goes into the ruins and begins the slow process of rebuilding his home. Mali works hard every day and at the end of the day, feels he has made a little more progress. He comes up on the road and sees his friend Saman sitting alone. Each day Mali asks his friend how he is and if he can do anything for him? Then, he sits quietly with Saman for a time before going to his brother’s house.

I finished my story and watched Prasanth thinking it over, his brow was furrowed in deep thought. After a few minutes, he looked at me and said, “I think I am more Saman right now. I want to be Mali, but I don’t know how to get there.”

“What part of Saman’s story feels like you?” I asked him.

“I sometimes don’t feel I have the energy to do anything. Simple things like getting out of bed or making tea is very hard for me. I don’t sleep well; often I have the same dream of being swept away and trying to reach my wife’s hand, but I never can. I wake up in a sweat, sometimes yelling out her name.”

“Feeling extremely tired and having nightmares can all be things that might happen to someone after going through what you have. This doesn’t mean there is anything wrong with you, this is how your mind is working on what happened to you. What part of Mali’s story do you see that you would like to be?”  I asked.

“Every day he works in his broken house, I would like to be like that. There are many coconut trees that havefallen in my field that I haven’t had the energy to move.”

“Would moving them help you be more like Mali?”

“I think so.” Prasanth answered, sounding a little more hopeful.

“How about you move just one tree before our visit next week? Just one, not all of them, just work on one.”

He looked at me and smiled just a little, “how about two?”

What I’ve learned over time is to remember that trauma effects each person differently. Every person is unique and so is how they may or may not react to a stressful situation. It is important to treat their individual experience with respect, dignity, and understanding.

Some common signs and symptoms of a person struggling with the effects of trauma can be:

If you feel this way or know of someone who is struggling with feelings like these following an event or incident that was very scary or stressful, remember you can always seek help.